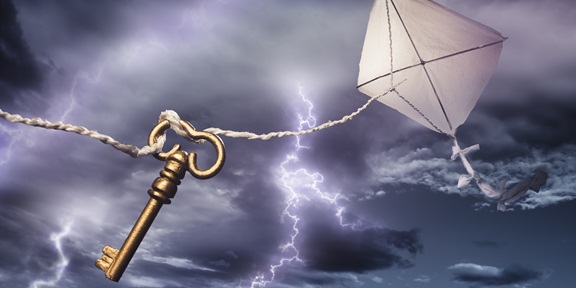 We all know the image of Ben Franklin holding onto a kite outside during a storm, but did he really invent electricity in this way?  Short answer, no.  But, in June of 1752, Ben Franklin came up with a theory that lightening was an electrical discharge.  To prove that theory, Franklin came to the fateful day of the kite experiment.

With his son, Franklin attached a large silk handkerchief to two crossed wooden sticks, attached a foot long rounded wire to the top of the kite.  A string was added along with a key at the end with a metal wire connecting the key to a Leyden jar.  The two took to a field on a stormy day where a passing cloud sent a negative charge through the rod and into the kite, through the string and key and to the jar.  Franklin held his knuckle out to the key where he felt a shock due to the negative charge from the key was attracted to the positive charge in his body.

Ben Franklin's account of his kite experiment was published in the Pennsylvannia Gazette on October 19, 1752.

Natural gas is lighter than air.