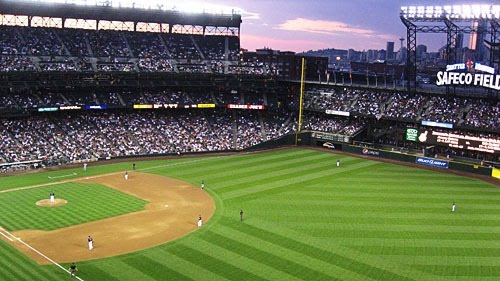 Baseball season is in full swing, and many fans are heading to stadiums to cheer on their favorite team. For the Seattle Mariner fans, there's more than just the ballgame to cheer about.  Safeco Field has been recognized as the leading green stadium, and we're not talking grass.  Safeco Field has been leading the way to protect the environment in baseball since 2006.

Safeco Field made history in 2014 when they became the first MLB stadium to switch to LED lighting. The former metal halide lights used 1000 - 2000 Watts each.  The 578 GigaTera lights use 800 Watts each.  This LED lighting is 20% to 30% brighter and uses 60% fewer watts and expected to last 30 years as opposed to 2-3 years of the old fixtures.  This switch has saved Safeco Field $50,000 in energy costs.

In 2012, Safeco Field went solar by installing 168 Panasonic Sanyo Hit Double solar panels.  These bifacial panels capture sunlight and reflected light that can generat 30% higher power per square foot.  The solar panels are attached to the skybridge roof between the parking garage and Safeco Field.

It's great to see all the MLB stadiums get involved in taking major steps to improve energy efficiency and reduce their carbon footprint.  Now, that's getting into the swing of things!  "Play Ball!!!"

Energy in motion is called Kinetic Energy. Electricity is kinetic energy because even though you can't see it happen, electricity involves electrons moving in a conductor.