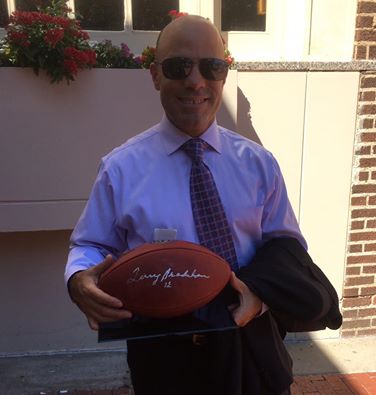 As we have often stated, Safe Haven of Tarrant County is one charity that High Voltage supports within our community for many reasons.  It was such an honor to be at Safe Haven's 2016 Legacy of Women Award Luncheon where 10 influential women of Tarrant County were recognized and honored for their achievements within the community.  The event was emceed by NBC News5, Deborah Ferguson.

The keynot speaker for this year was NFL Legend, Terry Bradshaw.  Bradshaw is not only known for being a sport legend, but he is also known for his giving, kind heart and being a positive role model. When thanked for his four Super Bowl wins, Bradshaw simply replied, "You're welcome."

Great items were available as part of the raffle.  Many businesses and local celebrities chipped in to help raise money for this amazing cause.  Andy is now proudly displaying the football signed by Terry Bradshaw in his office.  It's a great reminder of the good one can do for a community, and that is what High Voltage continues to work towards.

Click on this link to see the 10 women honored at the luncheon: https://www.safehaventc.org/events/legacyofwomen2016/

The voltage of lightning is intense enough to quickly heat the air to nearly 50,000°F (30,000°C), five times the temperature of the surface of the sun. The rapid expansion of the heated air generates a shock wave that is heard as thunder.