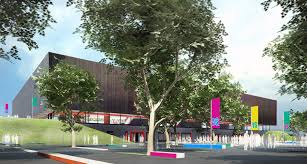 August 5th will be an exciting time for the world as the 2016 Olympic Games kicks off in Rio.  The last Olympic Games were held in London in 2012 and was the most energy efficient Olympics in history. Modern green designs helped to keep nine arenas and facilities that held the different sporting events energy efficient and sustainable.

Water Polo Arena - This facility was the very first dedicated to water polo in Olympic history.  The sustainable building was made of polyvinyl chloride material that is recyclable and the material from the building was reused in construction.

Basketball Arena - This building was made sustainable like the Water Polo Arena with easily recyclable materials.  This arena was the largest sustainable building ever constructed for temporary use.  It had a steel frame that covered 20,000 sq. meters of white recyclable PVC material.

The Veldrome - This building that held the indoor cycling track was considered one of the most iconic sustainable buildings in Olympic Games.  The building was designed to cool 6,000 people with a natural ventilation system using air from the outdoors, so air conditioning was not required.  Also, natural lighting was used during the day to offset the use of fluorescent lighting during the evening that helped save a lot of energy.  In addition, a slanted roof was used to collect rainwater for main water use.

The Copper Box - This building was perhaps the most efficiently designed building for the Olympics.  The building was used for court-style events like handball and badminton.  It got its name from the 3,000 sq meters of recyclable copper used on the exterior.  The Copper Box had 88 pipes used to draw in natural daylight that helped save on cost.  This building also had a roof to collect rainwater to help with waste management.

Parks - Former industrial land that was mostly contaminated was cleaned up to reveal 250 acres of natural parkland.  The beautiful park is now the newest urban park in 100 years in the UK.