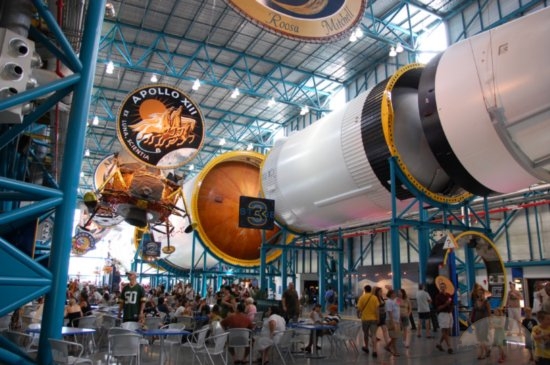 Kennedy Space Center in Florida will offer your kids an out-of-this-world experience this summer. What kid doesn't stare at the stars with a full imagination or dream of sitting in a rocketship as s/he is blasted off into space?  KSC is full of activities to educate, entertain and give memories to your whole family for years.  And, a summer day camp is also available from June to August for kids entering grades 2-9.  The camp offers your child a week of hands-on training in match, science, technology and engineering.

You may have to plan for more than one day to take in all the excitement that Kennedy Space Center has to offer.  One thing is for sure, with all that's offered, your kids will have a blast as well as be ready to blast off into space!

Here are some of the many things to do at KSC:

Shuttle Launch Experience - Veteran astronauts call Space Shuttle Atlantis the closest thing to actually experiencing a space shuttle launch in existence.  You will know what g-force at 17,500 mph feels like until you reach orbit where the awesome feeling of weightlessness takes over.  You will be able to sit in your seats while the doors open to reveal a replicated scene of Earth as seen by astronauts who are orbiting space.

Eyes on the Universe:  NASA's Space Telescope - This is a chance to experience NASA's only 3D and 4K resolution on screen at KSC Complex.  A 20 minute show will give you a look back billions of years through the eyes of a Hubble telescope for the search of other life.  This show runs twice a day.

Meet an Astronaut - One of the most exciting moments for you and your family could be meeting a veteran NASA astronaut.  The Live Astronaut Encounter Show has a veteran astronaut on site every day.  You will learn about the astronaut's personal training and experience in preparing for and launching into space.  It's also a time to ask questions and have a photo made with the astronaut.

Check out Kennedy Space Center online for all the details and plan a summer to remember for your family while increasing interest in science.  https://www.kennedyspacecenter.com

Saudi Arabia uses 65 percent of its oil for desalination of water and the associated electricity generation.