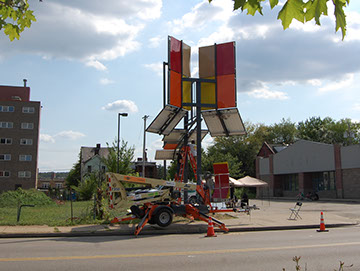 Twenty kids from the Homewood neighborhood (one of America's most dangerous neighborhoods) in Pittsburgh had the opportunity to engage in the education, design and installation of solar panels and charging station through Art + Energy Camp.  The youths - aged 8 - 17 - call their successful solar project Renaissance Gate as a sign of hope in what was a run-down lot of a community center in the neighborhood.

The first week of the six-week camp taught kids about the energy sector of Western Pennsylvannia by visiting coal plants.  The kids were taught about social and environmental issues of coal plants which Pennsylvannia has faced.  The kids then visited buildings with solar installations and energy efficiency systems.

Through conversation, the kids from this camp decided they wanted a gateway which signified walking from the old Homewood to the Homewood of the future.  They designed and created prototypes using popsicle sticks, paper and clay.  The solar panels which stand on an unshaded corner will produce 6,500 kWh for the Homewood Community Center's 12,000 square foot space. Also, the poles have 24 hour public outlets for charging phones and devices.  Solar panels are angled in such a way to not only take in the sun but give the vision of being a gate into hope for the future.

One of the students was quoted in the Pittsburgh Post Gazette saying, "Stop the violence, this is science.  People come together; let's build an alliance."

At the equator, the circumference of earth is 24,901 miles.